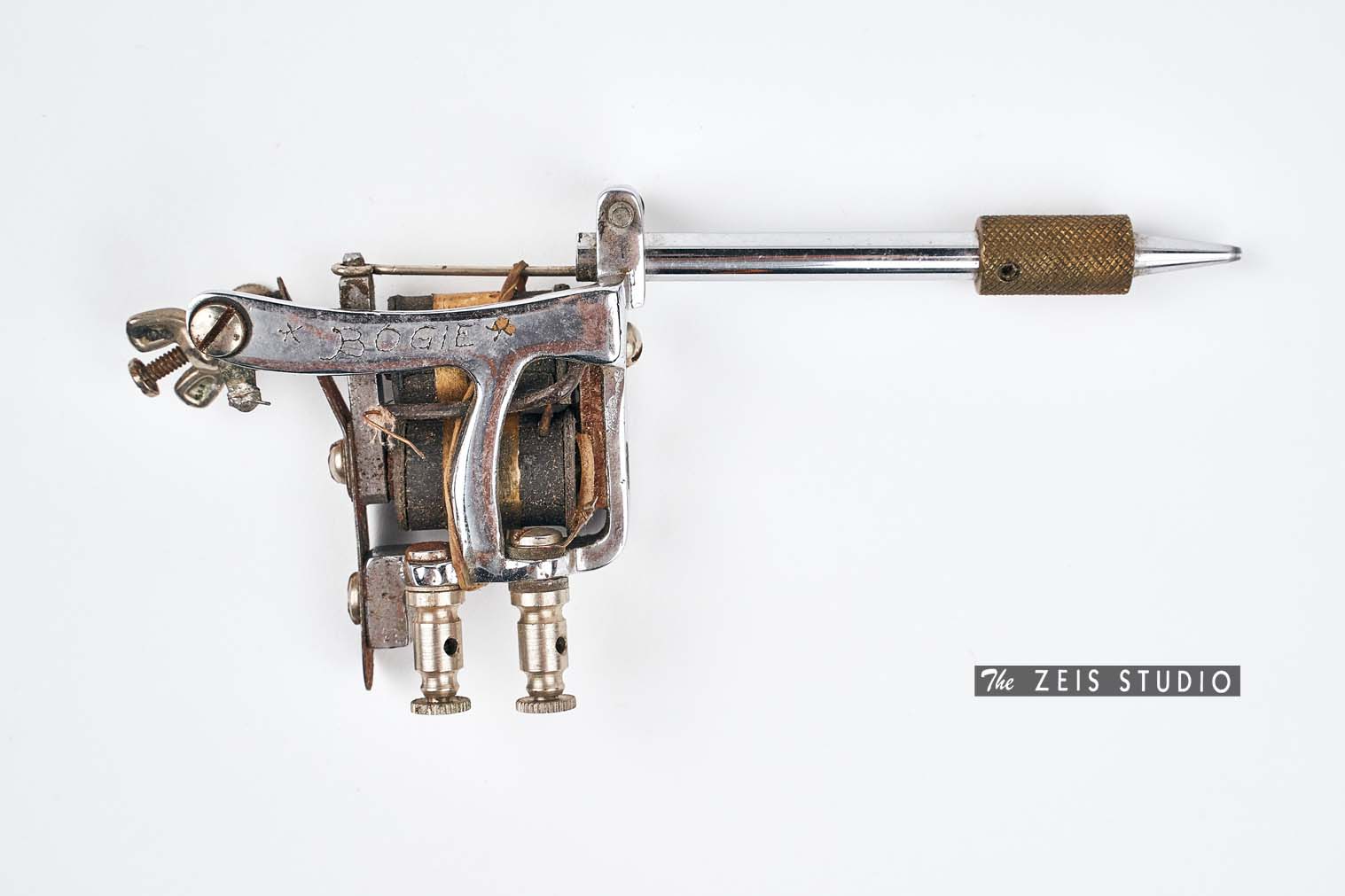 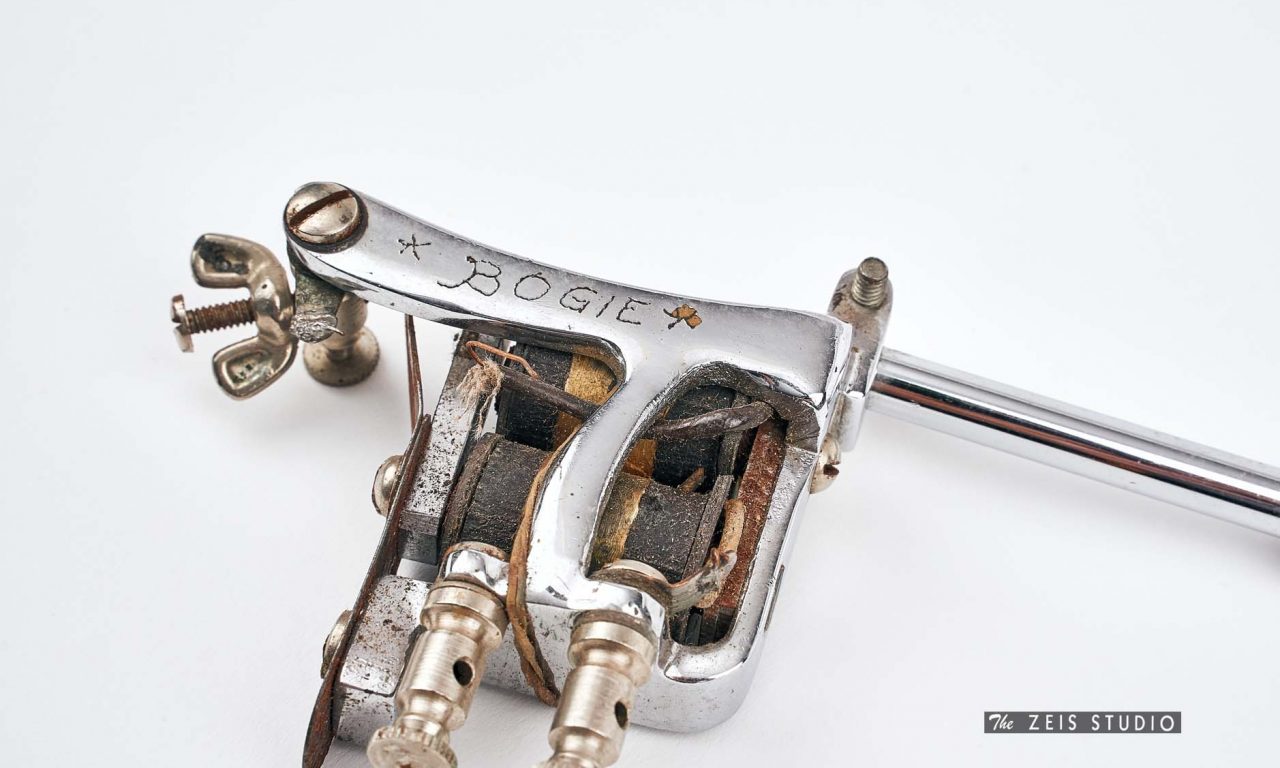 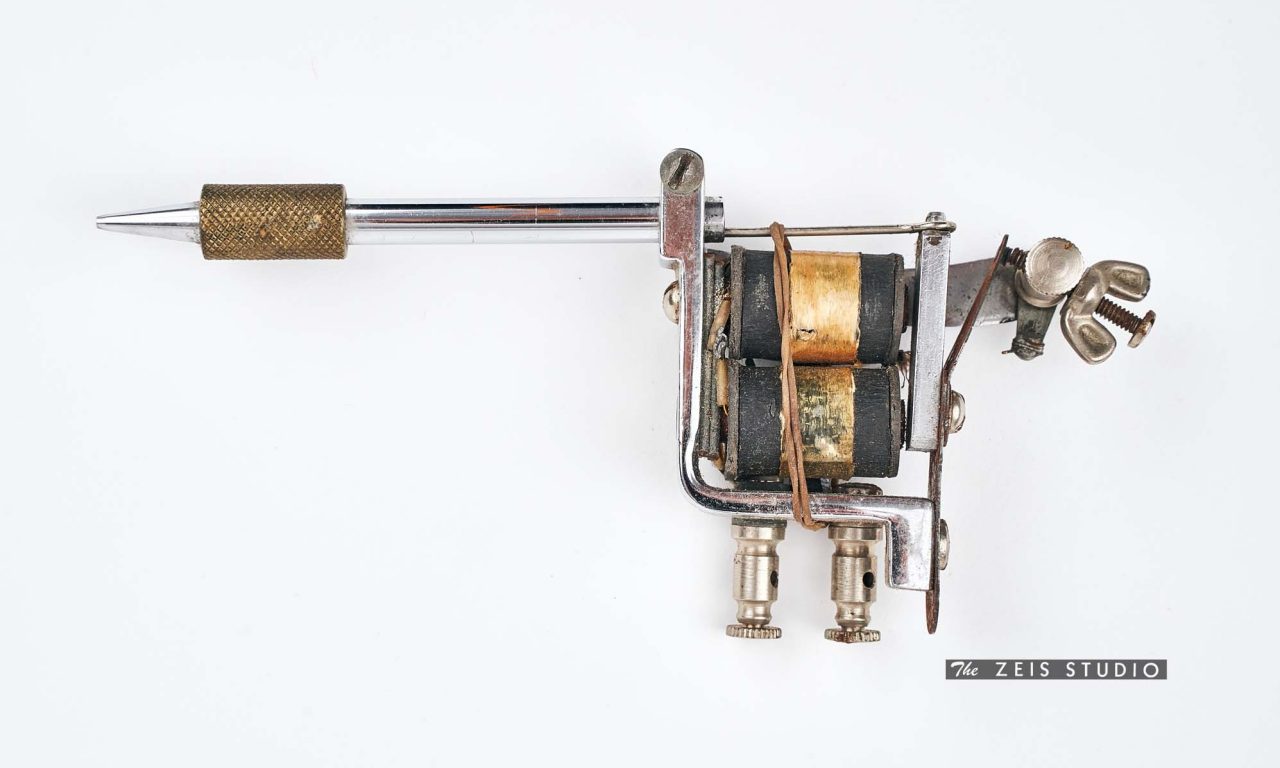 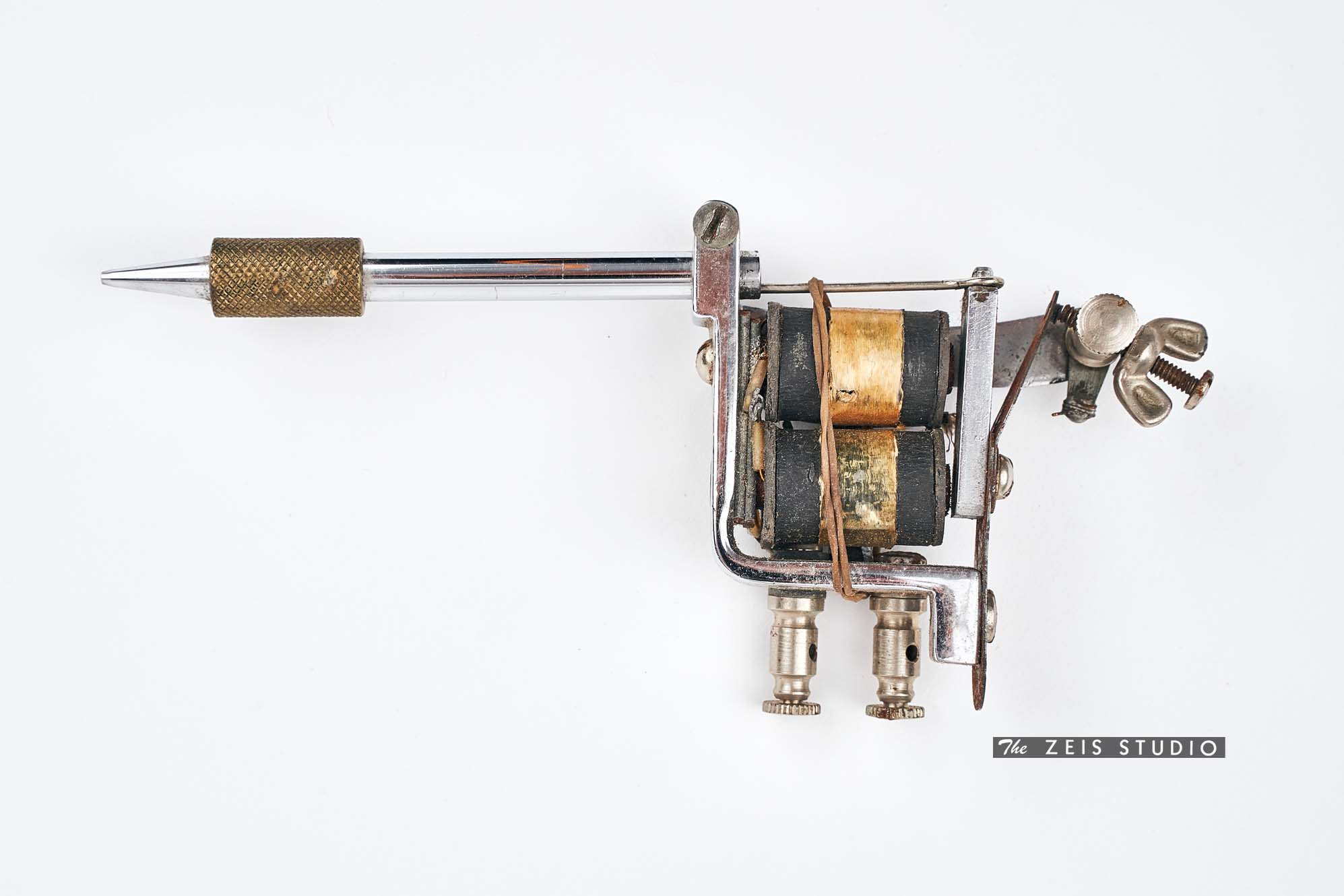 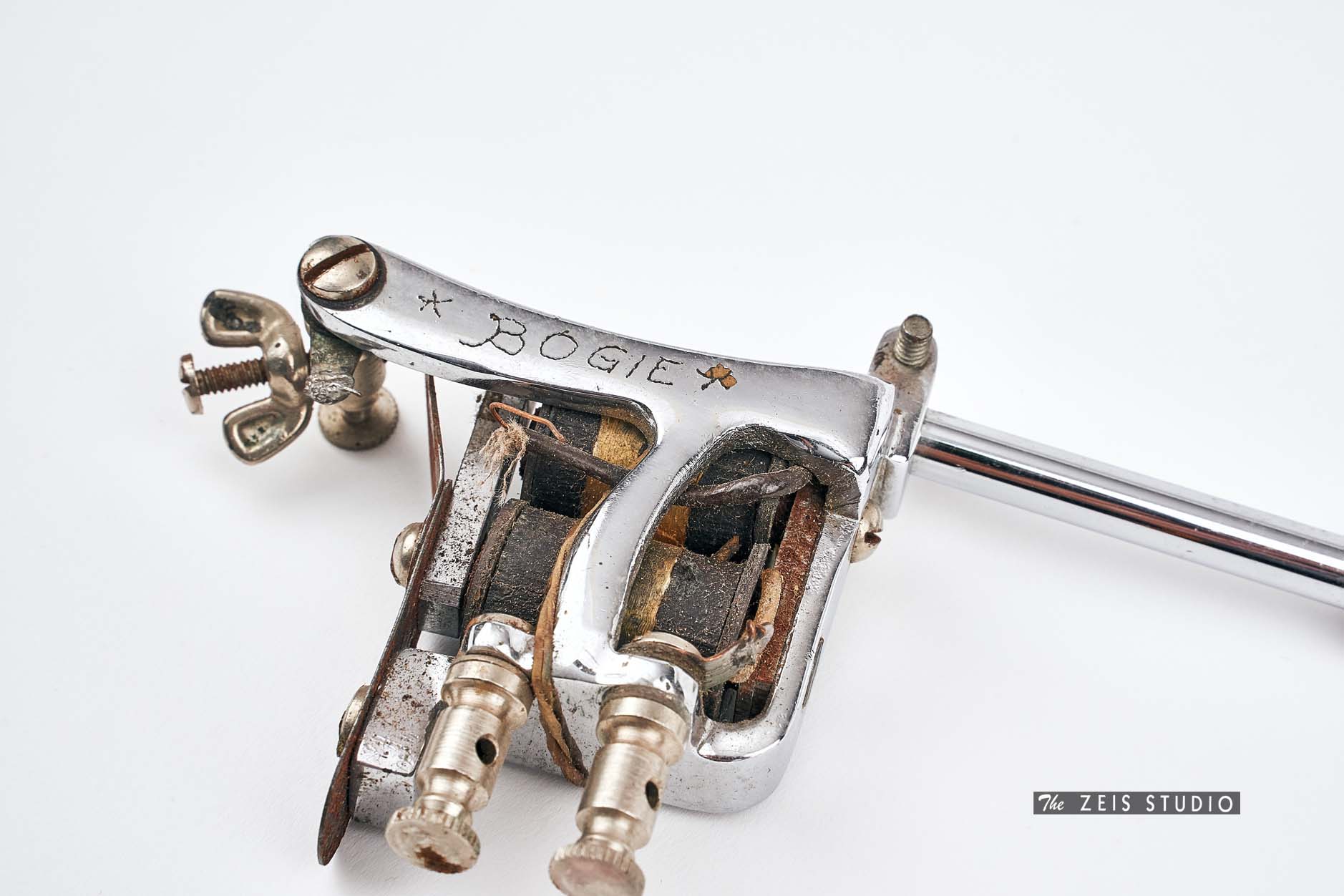 Dimensions: 7.125 inches tall, from top to tube tip. 3.25 inches from back binding post to tube vice.

It is believed “Bogie” is a person who owned the machine at some point, not the person who built it.

“This is a Jones round back style frame built by Milton Zeis. All the parts are Zeis parts and they are put together the way Zeis would’ve done it. This machine was not built by Bill Jones. The name scratched into it doesn’t have anything to do with identifying the builder.” -Nick Ackman

“Bill Jones sold his rejects to Zeis. I believe Milton and Doc King would re-work them. He sold them as a Zeis Deluxe same as is T Top Percy Waters made them they use to have on some PW on the upright inside you have to losses the front coil to see if it’s a waters one to see the stamped PW.” – Jimmie Skuse

“Not all we’re casted by waters.” “Zeis also Had casts molds.” – Robert Schaal

“If you look at the W’s on the inside of the Zeis frames they are not actually stamped in there, they are cast. Zeis made the t-top for years. He even made them after waters passed away. I personally don’t think waters was casting all of those frames with the W on the inside that Zeis sold and haven’t seen anything to prove that Waters cast them. I have a hunch Zeis took a Waters frame that was just like the Ttop that did not have the T at the top and added the T. I can’t remember what model of waters frame is but it exists it’s exactly the same except the flat top. My guess is he started out with the waters frame to make his pattern, So when they were re-cast the W that was stamped on the Waters remained visible on the inside.” -Nick Ackman

“The Zeis model B’s that I’ve had all had a W on the upright…All these guys used to trade back and forth…I’ve had a Spaulding and Rogers animal marker, that was a Jensen Special frame…The old Zeis catalog was also the same as the Waters catalog for the most part. The reason most Zeis frames had a W from what Lyle told me was because Waters was a foundry man and put a W as an identifier for the foundry…I have part of my social engraved in all of my caster blanks…” -Jack Fulscher

“I bet dollars to dimes it’s a Roundback frame by Jones built by Zeis…as we know Jones sold just frames…and complete machines for cheap, 3 for $12… My bet is Jones cast the frame… didn’t Jones sell Zeis Squareback frames at one point?? The coils are Zeis, the binding posts were common on lots of machines of the he era, they were actually made to be radio binding posts… Could it be that whomever owned it, the person whose name is engraved on it could have put Zeis replacement coils in it?” -Jay Brown

We use cookies to ensure that we give you the best experience on our website. If you continue to use this site we will assume that you are happy with it.Ok